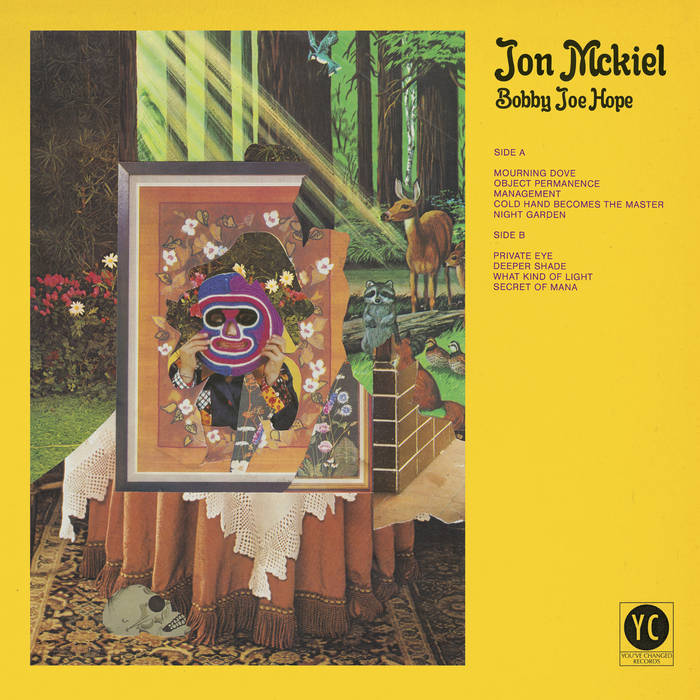 How do you speak through a stranger? Contain multitudes. And begin to find new kinds of design in accident. True story. In September 2015 Jon bought an old Teac A-2340, a reel-to-reel tape recorder, tapes included. He exchanged a few emails with the online seller while negotiating a deal, but they never met. The first time Jon tested out the machine at home it disclosed a beautiful dream. A single tape of astounding samples from an unknown source. He nicknamed it the Royal Sampler. They began to jam together.

I want to hear you speak. The tape might have been a lost demo for the games of hide and seek that accustom us to evasion. Listening and gathering, the only way out was through. A collaboration constructed in echo. The completed songs seem to start mid-sentence, waiting a little further along the trail. Watch your step the ground gets uncertain by the bend. The maple trees in giggling fits. The shoreline no longer sure. I hear the mourning dove. Hang on a second. You were saying. Sometimes what’s past isn’t prologue it’s blocked. How you have to pause for your mind to work backwards. Not to remember but to unforget. What if something’s missing and you get stranded in “the futureless future”? Distend time? The not-so-distant waves wrinkling. An answer. 1968 isn’t just some numbers. Scraps of an otherwise. Maybe written in another language or maybe…Is that what you meant?

The album was recorded during the summer of 2019 at Jay Crocker’s home studio in Crousetown. Under the watchful eye of Edward Snowden and a Blue Heeler named Judy. Jay and Jon transferred all the material they could excavate from the Royal Sampler along with the dialogic samples Jon had been making since that fateful September introduction. They combined these two samples with the following design principle: even in the songs organized around a Jon sample, the stranger would be woven in. A shared sonic architecture. The rest belongs a mystery.

Tell me what you see. A game of hide and seek. A field wears the fog like an ancient argument. Wayward voices take shape just up ahead. Count down from 10 and be alone again. Abandoned to potential. In the green wide open. The colour of another time. The hammock gets twisted in the wind. Knotting and undoing. A fishnet. Let loose or captured, a life repeated, a life revised. Nothing is effortless. From another era insisting, there all along. I was there all along. These sounds, like truth, can be measured in time. Speak through me. Who can tell you what is real?

You've Changed Records is an artist run label established in 2009.

Bandcamp Daily  your guide to the world of Bandcamp

Featuring Gary Bartz, 5 years of Rhythm Section Intl and an LP of the week by Nicolas Jaar